After a year of quiet, I finally published a new column on my North Star platform at the Greenbiz.com website. This column was also published in a Swedish version, here. Plus there’s an afterword, on music, and some news about book translations. Here’s the column:

In 2015, the world, acting through the United Nations, set in place a system of 17 very ambitious goals to guide humanity’s development toward sustainability through 2030.

Now it is 2021. Neither nature nor global politics has been especially kind to the U.N. Sustainable Development Goals, also known as the Global Goals, over the past few years.

Nature’s complex mechanisms have served up a global pandemic caused (apparently) by a cross-species virus together with intensifying fires and storms that can be credibly attributed to climate change; and the global political arena has mightily distracted us with assaults on democracy and global solidarity as well as chronic conflict along multiple fronts.

COVID-19 gets the lion’s share of the blame, of course, for our current troubles. In too many places and across too many dimensions of sustainable development, the pandemic has turned hard-won progress into a backslide whose momentum must first be stopped and reversed before development can again take on the shape of positive transformation. I am thinking especially of global poverty, hunger, health and education — SDGs 1 through 4 — where the latest figures from the World Bank and other centers of analysis paint a bleak picture of years lost and lives threatened.

But the analysis does not stop there. The SDGs are treated as an interlinked system of goals because that is how the world actually works. I won’t bore you with the relevant SDG numbers, but you can easily build your own mental systems map from the following:

Virtuous cycles can turn vicious. That is an undeniably dismal state of affairs for those of us whose professional lives revolve around trying to help the world achieve these universally acclaimed goals (which also inform the more specific development goals set for Sida, the Swedish agency where I work, by Sweden’s government). How is it possible not to succumb to an erosion of hope?

As always: by looking at the big picture, taking the long view and continuing to seek more effective levers of change.

There are no silver linings in a global pandemic. But there are unexpected things to observe and to learn from — such as the dramatic acceleration of digitalization. Profound changes in working methods and styles have been reported wherever decent internet is to be had. Suddenly, meetings and conferences that previously “had to be” held in physical, face-to-face settings are working just fine on screen. Maybe better: You can include more people, under roughly equal conditions, when you don’t have to fly them around and put them up in hotels of varying fanciness.

Necessity has mothered digital invention together with rapid learning advances that have proved to us that we can change must faster than our most ambitious management plans assumed was possible.

Thanks to these advances, work on sustainable development has not stopped. In fact, in some critical areas, it has intensified. Consider finance. In the past year major investment leaders at the global level have pushed themselves and others to take stronger stands (and produced better measurable results) on climate change, diversity, gender equity and corporate responsibility generally. Investment levels in developing countries may be down, but new vehicles for that investment are being innovated and designed, so that when the money flow eventually accelerates again it will have more and potentially more effective places to go.

It is not my purpose here to paint a rosy picture of the future with these short syntheses and personal impressions gleaned from dozens of recent digital meetings, reports, dialogs and conferences. As a world, we have a tough road ahead. People living in rising poverty and oppression have it toughest of all, and I challenge everyone reading this to keep that reality in the forefront of their minds as we continue down that road.

But it is important also to bear in mind that COVID-19 has not made the achievement of sustainable development impossible. It has, of course, made achieving those goals by 2030 a whole lot harder (and it was already very hard). Yet it has also shown us that even in the midst of serious global calamity, when the goalposts are still shifting away from us, we can (and must) keep pressing forward. Working to prevent greater damage where we have to. Making positive change where we can. Believing that the tide eventually will turn again in our favor.

Because that is what will make it turn.

For those who have read all the way through the “Words” part of this newsletter, here comes “&Music”.

I started playing guitar recently. That might seem a strange statement — I have been playing the guitar for 43 years. Just not recently. 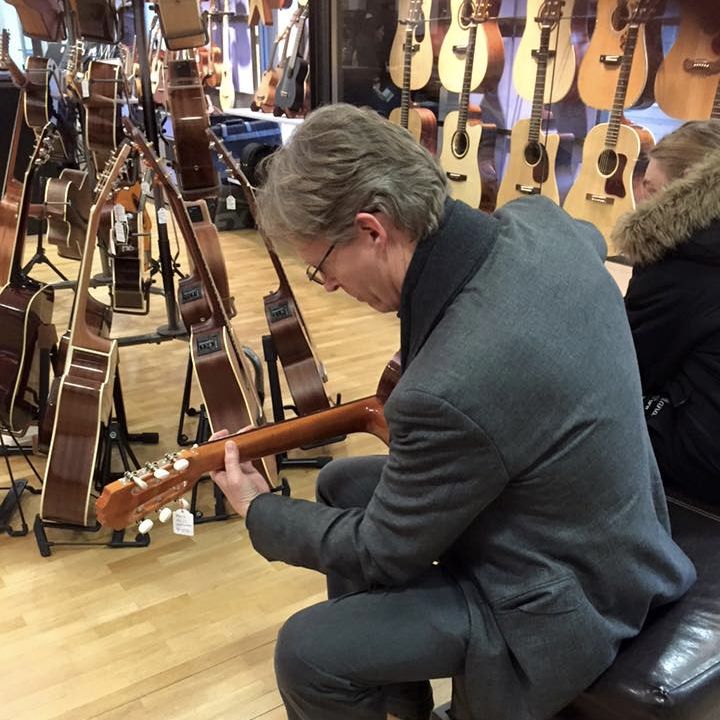 Despite all the extra home time that a pandemic provides, my guitars have resolutely stayed in their respective cases most of the year. But last Sunday, I set a goal of playing all four of my guitars at least once during the day: my workaday Martin D-2832 (which I carried with me everywhere for decades, it has many dings and airport security stickers to prove it), my much-fancier Taylor (the one I use for shows and recordings), the classical guitar I still think of as my “new” guitar (I bought it five years ago, see picture from my friend Gillian Martin Mehers), and my electric, an ESP strat built for me by Mark Dann, the legendary bass-player whom I met during the heyday of Greenwich Village’s “Speakeasy”/Fast Folk era, also known as the 1980s. (Mark is still active, here is a recent YouTube video of him recording a bass track in his studio.)

On that same Sunday, I also drank real espresso coffee for the first time in over a year. Do you think those two things somehow go together?

In any event, I played all four guitars. And then I played guitar every day last week. I kept one by my desk, to pull up during short breaks from all the Zoom, Teams, and Skype meetings. It gave me such joy (and a little pain) to reacquaint my fingers with the strings.

Maybe it was the coffee: I felt it in my system for days afterwards (though I drank not another drop). In between meetings with my colleagues at Sida, the agency where I work, and where we aim to improve the lives of people living in poverty and oppression, I would either pop out for a quick walk in the warming Swedish weather, or pick up my guitar to relearn an old favorite.

Often this one, Moon’s Best Friend, an autobiographical song about what I remember from being two, three, and four years old — with a bit of artistic embellishment, I confess.
Listen to “Moon’s Best Friend” on YouTube  /  Spotify  /  Apple Music  /  Amazon
From the album “Testing the Rope”, Rain City Records, 1997

The song focuses on my relationship to my babysitter, a teenage boy named Peter. Here’s the chorus:

The embellishment is this: there was no children’s book called “Moon’s Best Friend”. I made up that little detail. But over the years, the fact that such a book didn’t actually exist bothered me.

So a few years ago, I wrote and illustrated a children’s book for two- to four-year-olds, called “Moon’s Best Friend.”

But that is a story for another day.

Finally, there are now Swedish, French, and German editions of my little bestseller Sustainability is for Everyone. all now available in both paper and free PDF versions at their respective websites. Just click the language of your choice.