Alan AtKisson’s books include two bestsellers that have sold tens of thousands of copies — Believing Cassandra and Sustainability is for Everyone. These two, as well as two of his other books — The Sustainability Transformation and Parachuting Cats into Borneo (with Axel Klimek) — have been used in many university courses and professional training programs in sustainability.

The Sustainability Transformation includes an introduction to the sustainability tools Alan developed and helped to spread around the world, including the Sustainability Compass, the Pyramid workshop on sustainable development, and the Amoeba training in professional change agentry. These tools are now owned and managed by a non-profit organization, Compass Education. (For quick video introduction, see Alan’s TEDx-talk from 2014.)

The following is a complete catalog of Alan AtKisson’s books

2020 – The Chronosphere Commentary: Reflections on a poem about time 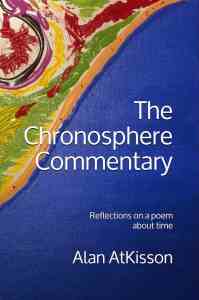 Alan’s most recent book is a very personal statement that takes the form of 61 short essays, all focused on a single long poem in 61 verses. The poem, in turn, focused on questions related to the limited time of the lives we live here on planet Earth. Dedicated to a physicist friend whose battle with cancer set these questions in stark relief,  The Chronosphere Commentary: Reflections on a poem about time takes the reader on a spiraling path through philosophy, science and poetry and closes with a moving remembrance of a friend’s confrontation with the end of life. Available through any bookstore. Click here to visit the special interactive website where you can order the book and explore the text, free, online. 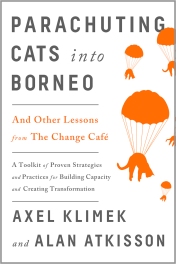 Two out of three efforts to create change in companies, organizations, etc. fails to achieve its desired result. How can you buck this long-standing trend? In Parachuting Cats into Borneo, Axel Klimek and Alan AtKisson offer crisp, concise, and targeted advice for success. Drawing on decades of helping corporations, networks, governments, and NGOs reach their change goals, the authors show you how to use systems- and sustainability-based change tools — and more importantly, how to develop your own capacities, question your assumptions, and learn to navigate complexity with attention and purpose. Called “insightful” and “particularly valuable” by Publisher’s Weekly, and widely praised by leaders in business, change management, and sustainability. READ MORE

2013 – Sustainability is for Everyone

This 50-page, simple and inspiring introduction to sustainability has been translated into several languages (most recently Swedish and French), purchased by companies and universities for distribution to all their employees and alumni, and sold tens of thousands of copies. Written on the occasion of Alan’s induction into the International Sustainability Hall of Fame in 2013, and intended to help sustainability professionals reach new audiences by using simpler concepts, Sustainability is for Everyone became a surprise bestseller for Alan’s small, independent publishing imprint when it was discovered to be an effective way to engage newcomers to the field. More than 30,000 copies have been purchased, but now the book has also been available free in PDF format. The second edition includes an extra preface about the United Nations Sustainable Development Goals (the “SDGs”).  READ MORE

2010 The Sustainability Transformation: How to make positive change in challenging times 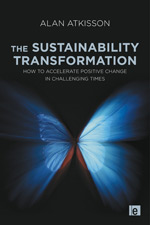 Alan’s second book was an exciting introduction to the professional practice of sustainability. As in Believing Cassandra, the writing style mixes personal stories with clear explanations, tools, and case studies. The Sustainability Transformation introduces the reader to the tools and methods Alan developed in the late 1990s, which have since spread around the world, helping people do sustainability more quickly and more effectively. It also digs deeply into the challenges and opportunities facing anyone who decides to become a sustainability change agent. Both Bill McKibben and Hunter Lovins called it “essential,” and the prominent academic journal Ecological Economics wrote (in a formal academic review) that “The book is inspiring and informative, and offers clear and easy-to-follow framework and tools.” See the full review in the journal Ecological Economics, May 2011… READ MORE

Alan’s first book became the top bestseller in its category on Amazon.com even though it was released late in the year. Completely updated for the new edition (with a new publisher) in 2010, Believing Cassandra was long used as an introductory coursebook at universities and was purchased in bulk by companies and government agencies for employee training programs. Paul Hawken called the book a “neurotransmitter” that helps readers make the connections between sustainability, their professional work, and their own lives. It achieved Alan’s initial goal for the book: inspiring more people around the world to begin working on building a sustainable future. READ MORE

2012 – Life Beyond Growth: Alternatives and complements to GDP as a measure of progress

“Life Beyond Growth,” published in book form in Japan (where Junko Edahiro joins it as a co-author), is available free of charge in English in its original report format. The report covers the history of “economic growth” and the rise of the “GDP” as its principal measuring stick, then introduces the array of serious critiques and alternatives that have arisen to challenge conventional wisdom in recent years. The report demonstrates how countries around the world (from China to the UK) as well as US states and cities are using new measures of progress and wellbeing to complement the GDP. Presented at a global OECD forum in 2012, and cited by other authorities such as the United Nations, “Life Beyond Growth” closes with look at the future and concludes that a combination of the emerging new economic ideas — “Green Economy” + “Gross National Happiness” — is the key to a sustainable world.

Because We Believe in the Future is a tour through the history of sustainability from Alan’s unique perspective, via his essays, speeches, blog posts and other short pieces collected over a 20-year period. The collection includes Alan’s moving tribute to his mentor and friend Donella H. “Dana” Meadows, “The Brightest Star in the Sky,” as well as the essay that inaugurated a UN-sponsored Knowledge Partnership, “Pushing Reset on Sustainable Development.” You’ll also find his best shorter pieces, including an early column that went viral on the Internet (long before Twitter and Facebook): “Dear Santa, I Hear the North Pole is Melting.” READ MORE

The publication of Collected Poems 1982-2009 marked the first time that Alan AtKisson’s poetry — which previously appeared only in small literary journals and chapbooks — had been published all together in one place, in book form. The collection includes his best early work as well as his two long poems, “Chronosphere” (on the relationship between human beings, time, and death) and “Screed” (a multi-genre mash-up on the folly of global civilization in an era of climate change). Lovers of poetry will discover that AtKisson is a serious and accomplished poet whose work references the modern masters, but sometimes dispenses with them, as in the deeply ironic “Purging Wallace Stevens.” Alan’s sustainability-oriented readers will gain a new perspective on his writing and personal philosophy. READ MORE