Alan AtKisson’s music has appeared on US TV, been featured by the UN and EU, inspired professional training programs, and used in schools and universities around the world. His latest album is The Last Dice, released on 31 January 2020. Download it free, or stream it on all major digital services.

“The Last Dice” (2020) is a new presentation of previously released songs, with a new title, cover, and special song order that also works as a playlist, starting slow and personal and building to global and inspirational.

Each song is linked to a place on the planet from Alan’s life and global travels, from the Swedish archipelago (“Midsummer Island”) to the small petrol stand in Uganda (“Entebbe Blues”) to his grandfather’s farm in rural Missouri, USA (“I’ll Be”). Includes “Set the World Right Again,” selected by the UN as a “Climate Change Song of the Week” in the runup to the Paris Agreement in 2015.

Read the blog post about this special new presentation of Alan’s songs backed by some of Sweden’s top studio artists.

“We Love the SDGs”, a single released in 2015 to celebrate the United Nations’ global adoption of the 2030 Agenda and 17 Sustainable Development Goals, is Alan’s most successful release to date (according to streaming data from YouTube, Apple and Spotify). Featured at UN and EU events, performed by school and university ensembles, and viewed tens of thousands of times on YouTube in its dance-music-video format, “We Love the SDGs” is an unapologetically upbeat dance tune with elements of pop, reggae and rap. A four-part choral arrangement is free to download, as is a regular and a karaoke audio file. Schools and student groups can even download a free study guide to the song, to help them learn about the 17 Global Goals.

“Put this album in your playlist alongside greats like Ben Harper or Dave Matthews Band“…”Atmospheric, inspiring, uplifting…”

American Troubadour was Alan’s sixth studio album. Recorded with some of Sweden’s top studio musicians,  produced by Andreas Bauman, this is “mature and accomplished songwriting with a smooth vocal style and a clear-eyed sense of purpose” (Tunecore Review).

You can listen to the album on Apple Music, Spotify, Amazon, YouTube and many other digital streaming services. (Here’s a secret: The Last Dice is American Troubadour, in reverse.)

“Set the World Right Again” (track 4 on American Troubadour) was featured by the UNFCCC Newsroom as “Climate Song of the Week for Paris” in August 2015.

Watch the music video “We Love the SDGs,” a high-energy tribute to the United Nations’ Sustainable Development Goals (the single is also available on all major streaming services):

Alan AtKisson is an American-Swedish author and senior advisor in the field of sustainability who now works as an official in the Swedish International Development Cooperation Agency.

But long before AtKisson started his career in sustainability and sustainable development, he was a professional singer, guitarist, and songwriter. He began performing professionally at 18, singing in bands in New Orleans, USA, and playing in pubs in the UK to help finance his education at Oxford University. After completing a post-graduate fellowship in Malaysia as a Henry Luce Scholar, AtKisson went to New York, fronting rock bands, performing in a folk-rock trio, and doing solo performances throughout the mid-1980’s. He performed in many of New York’s most famous clubs at that time, including Speakeasy, CBGB, Folk City, Kamikaze, the Bitter End and the Bottom Line.

But when offered a contract by a leading show business lawyer/manager in New York, AtKisson said “no thanks” and decided to change course. He returned to his intellectual passions — science, economics, human rights, sustainability — and concentrated on writing and journalism.

This change in direction led him to become the executive editor of an award-winning  journal, In Context, focused on global issues, systems thinking, and cultural change.

But AtKisson’s immersion in the world of sustainability resulted in an unexpected kick back into his musical career:

“Around 1990, I wrote a little tune called The Dead Planet Blues because I was feeling glum about the global environmental trends I had been studying all my life. That song got some radio play, and pretty soon I was writing songs again and performing internationally. In 1992, I integrated music into a keynote speech for the first time, at a large international conference in Prague … and after that, music — which I thought I had left behind in New York — was once again part of my professional life.”

After that, AtKisson routinely integrated music into his speeches and workshops. You can see an example at the end of this TEDx talk. (The song begins at minute 15.)

And he began writing new songs and releasing albums on the independent Rain City Records label. 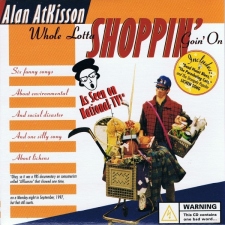 In 1997, AtKisson released two albums simultaneously. “Whole Lotta Shoppin’ Goin’ On” is a sustainability comedy album, with songs inspired by Tom Lehrer and other satirists. It includes “Dead Planet Blues” as well as other songs that soon became highly requested “classics” in AtKisson’s repertoire, such as “The Parachuting Cats” and “Extinction Blues” (songs he still performs at conferences). The title song was used as the opening to John de Graaf’s award-winning PBS documentary film about American consumerism, “Affluenza”.

The second of the two albums AtKisson released simultaneously in 1997, “Testing the Rope” is an atmospheric tour de force of songwriting, with a stripped-down acoustic sound that focuses attention on the quality of his voice. There is a revealing intimacy to many of these songs, written during a time of great transition in AtKisson’s life, both as an artist and as a human being. The opening song, “Balaton,” captures a moment of despair, awakening, hope and community experienced during a storm on Hungary’s largest lake. (It is dedicated to an international association of sustainability researchers, founded by Donella and Dennis Meadows, called the Balaton Group. For many years it was used as a closing song for their annual meetings.) “Nothin’ at All” and “Time Stands Still” convey the ache of break-up, while “Love Lovin’ Lover” and “Everything is New” convey the opposite: fresh starts with eros. “Testing the Rope” is a line from the song “Moon’s Best Friend,” sung from the perspective a small boy remembering his friendship with an older boy who had been engaged by AtKisson’s parents to care for him. By turns moody and exultant, and featuring expert finger-style guitar work, this was the album that announced AtKisson’s arrival as a fully-formed musical artist.

Believing Cassandra (The Musical Companion to the Book) (1999)

When AtKisson published his environmental bestseller, Believing Cassandra, in 1999, he also released a new CD with the same title. The new album included a few of his older songs (because they were mentioned in the book) as well as many new songs with sustainability themes. These ranged from the educational infotainment-song “Exponential Growth” — which AtKisson still performs, a capella, in many of his lectures — to the uplifting folk-rock anthem “What Kind of World”, a song of vision and hope that was also featured on the US television show Good Morning America. This album also includes “System Zoo,” a “7-minute musical course in systems thinking” that AtKisson uses to get audiences snapping their fingers and singing along while learning the language of sustainability science.

In this extremely spare and atmospheric acoustic album, AtKisson sets the poetry of Rainier Maria Rilke — beautifully translated by Joanna Macy and Anita Barrows — to song. While Rilke’s “Book of Hours” is framed as a set of dialogues between a monk and God, these songs are also dialogues with Life and its meaning. In the late 1990s, AtKisson wrote and performed a one-man musical play, based on Rilke’s letters, that incorporated these songs. (He did not choose to release the recording, made in 2000, for six years — which, ironically, was also what happened to Rilke’s manuscript. “Book of Hours” sat in a drawer for six years before being published.) “I live my life in widening circles,” wrote Rilke, “that reach out across the world.” He searches and searches for the meaning in all the suffering, despair, and joy that he sees in his travels. And he searches for his own identity, but does not quite settle on it: “Am I falcon, a storm, or a great song?”

After a long hiatus, AtKisson returned to the studio in 2012 to record, over a two-year period, a gorgeous new album produced by Andreas Bauman and featuring many of Sweden’s most gifted studio musicians. The title and graphic imagery played with his evolving American-Swedish identity (AtKisson, who comes from Scandinavian roots in the US, married a Swede in 2001, was granted citizenship by the government of Sweden in 2006, and speaks very fluent Swedish). The songs, while never saying “sustainability” or “climate change” or “inequality”, nonetheless convey the emotions involved in traveling the world and dealing with these challenging global issues on a daily basis, as AtKisson does in his role as an expert, consultant and speaker. These songs both inspire and soothe: in “The Last Dice”, we listen to AtKisson “shuffle ’round in Istanbul” feeling “world weary”, as lost as Ulysses (“lash me to the mast”). But he finds hope — “I place my bet / on the long shot” — and the acoustic guitar dialogue he’s having with Swedish virtuoso Torbjörn Fall carries the listener peacefully across the dark waters of the Bosporus. Also included in this collection are true song-stories from AtKisson’s childhood and youth: befriending a wild manatee (“Maxie”); watching his Missouri-born grandfather taste the sea for the first time, on a visit to AtKisson’s childhood home in Florida (“I’ll Be”); and dealing with manipulative teachers while studying at Oxford (the spooky “Isn’t There Someone Here”). Musically, these songs tend to build quietly, each of them growing on the listener and conveying an intensity of experience in a small, satisfying package.

“Ancient History” is a collection of AtKisson’s earliest songs, starting from his debut in New York in 1982 with the cassette album “Whitewing”, recorded in the recording studio/bedroom of his friend Darryl Cherney (a New York songwriter who later went on to become a famous Earth First! activist in California). Some songs were recorded on a primitive home studio (with the associated hisses), others in a commercial 24-track setting. These cassette albums were never released commercially; they were usually distributed to fans at his New York gigs, as well as to friends and family. “Whitewing” tells the story of Icarus and Daedalus, backed with a simple acoustic guitar. “Invisible Man” is a rock anthem recorded with AtKisson’s band at the time, Local Colour (it’s the song for which the band was known on the New York rock scene). “Epiphany Dream” was recorded for the legendary “Fast Folk Musical Magazine” with members of AtKisson’s folk music ensemble. Released in 2014, “Ancient History” is a time capsule, and these songs create characters, tell stories, and put AtKisson’s guitar and vocal skills on display.

To see the full discography with links to download sites, visit: http://www.tunecore.com/music/alanatkisson

Alan’s music is available on Apple Music, Spotify, Amazon, and other digital platforms.

All of Alan’s music has been released on the independent record label Rain City Records, which he founded in 1997.