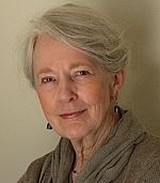 My dear friend Joan Davis passed away on Monday, 11 January, 2016. She was a unique and inspirational person, a top scientist who also believed strongly in the spiritual dimension of human life, the “non-quantifiable variables” as she liked to say. Her extraordinary life is being remembered, in English and German, on a special website set up by her close friends in Zurich, Switzerland, where she lived most of her life (she was originally from Ohio). I have written a remembrance of her there.

Here, I am publishing something else. Joan loved stones and shells, which she had lying on her window sills and tables. This text, “Seven Pieces of Joan,” is something like that: a collection of seven discrete memories, like stones clustered on a table, reflecting how much of Joan’s subtle influence in my life I keep discovering as time goes by.

At the end, I have posted a song (about water), which was in large part inspired by Joan. It has very poor sound quality, for which I apologize, but it is the only digital copy I have, of a song that was recorded on a primitive (by today’s standards) cassette deck, in 1993.

Two days before Joan’s death, I had gone back to a certain store to buy a certain wool sweater, like one that I had just bought the week before. I found the styling relaxed, yet somehow elegant in its simplicity. I liked the thin, gray fabric, and the way the end of the sleeves felt unfinished and were rolled up a little bit. “Joan would like this,” I had thought to myself. “It reminds me of one of her sweaters.”

Two decades ago (Joan was fond of talking in terms of decades and quarter-centuries) I was at a Balaton Group meeting. Joan took a liking to one of my shirts, dark blue, linen, long-sleeved. “That is really nice,” she said. “I wish I could find one like that!” So at the meeting’s final banquet, I wore the shirt, and then I stood up and gave a little speech about friendship. “There’s a saying: a true friend is someone who will give you ‘the shirt off his back’. Joan, you have certainly been a true friend to me. So Joan, here, I give you my shirt.” I took the shirt off and presented it to her. She gave me that sidelong, mischievous look, but accepted the gift with gratitude. Later, on visits to her house, I saw her wear it a number of times.

Outside my office-cottage at the back of our property, on the tiny porch I built, there is a certain beautiful shell that I picked up somewhere. I placed it on the corner of the porch, so that it catches my eye each time I go into the cottage. It has a special white-and-reddish beauty, which speaks of its former life in the sea, contrasting perfectly with the plain gray wood of the porch, and the green-brown forest around it. “That shell is like one of those shells Joan has all over her house,” I think often to myself.

Many years ago, on a visit to Wallisellen, I photographed some of Joan’s stones and shells. I downloaded the images to my computer — both Joan and I were avid Mac people — and shrunk them down, and then turned the images into small icons. Then I used the icons to replace the little drawings of folders that Macs have on their desktops. So then, when I needed to open a folder and review my archives or my correspondence, I was usually clicking on one of Joan’s snails or stones.

Joan was a professional water person, and at the time we first got to know each other, so was I. But we shared a relationship to water that went far beyond science and policy. Water, the simplest of chemical compounds, is also the most extraordinary: beautiful, ever-changing, ever-reflecting, and of course, we ourselves are mostly water. Joan, an aquatic chemist, also taught me to appreciate the special qualities of water in new ways. So whenever I am admiring water, thoughts of Joan are never far away.

After my first Balaton Group meeting, where I met Joan for the first time, I wrote a new song. Songs are strange things: once I have composed and written them, and sung them a few times, I (usually) no longer remember how I wrote them. I can remember the feeling-tone that gave rise to the song — in this case, reflecting on the wonder that is water, sitting by Puget Sound in Seattle. And I remember certain special times I perform them — like the first time I played “Water of Life” for the Balaton Group, and for Joan, in 1994.* I remember her smile. There was a bit of water in her eyes.

Joan had a mystical relationship with the number 22. It was a signifier, not of good or bad, but of something very important. When it turned up, she knew she needed to pay close attention to what was happening. She had so many unusual stories around that number; at least one story involved a moment where noticing the number on something (in the context of a car accident) saved her life. I have also loved, for no good reason I can explain, 22: it was the number I chose for my jersey when I played basketball as a teenager. So whenever I see that number, of course I think of Joan. On or about the day Joan died — was it on that day? a few days before, after? — my daughter came to breakfast in a new t-shirt, with a sports theme. The shirt had a big number on it: 22.

* My song “Water of Life” was only recorded once, on a home “demo” cassette album called “Fire in the Night”. The quality of the one copy I have is very bad. But I post it here anyway, and the lyrics below. Conversations with Joan Davis, and listening to her lectures, were very much a part of what inspired this song into being.

Look at the light shining off the Sound

But me, and this body of water

Alone in a crowd

Of stars and stones and trees and passing clouds

Sing up the beauty of this

Look at these jewels of morning dew

The eyes I’m looking through

Are windows of water

When it falls down

I am water watching water hit the ground

Every drop splashes up a crown

The Queen of all the Earth is

The water takes a complete control

Like an ocean of love that rocks my mind

Look at the waves rolling up the beach

They can almost reach

The place where I’m standing

Won’t be too long

The moon will pull that tidal rush up real strong

Me and my footprints will be gone

But evermore there will be