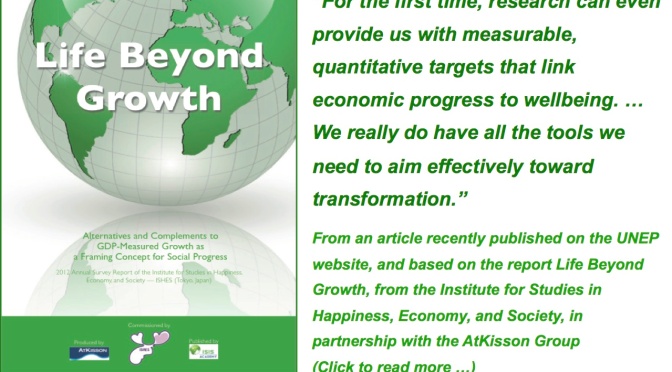 Can we create “happiness for all” while preserving the planet? Will humanity manage to create “green economies”, and convert our current economic systems from destructive forces to sustainable and indeed restorative processes, in time? The new report Life Beyond Growth — issued on March 1, 2012, by the Tokyo-based Institute for Studies in Happiness, Economy, and Society — maps the past and future of this emerging vision, and the growing revolution in economic thinking that is behind it.

The report, however, takes a nuanced view. Notice the word “economies” in the paragraph above: while we often refer to a single “global economy,” the truth of the matter is that human civilization is comprised of a complex network of many different economic systems, powered by many different kinds of energy and information, guided by many different hands, both visible and invisible. Many of the world’s economies are still free-standing, subsistence communities, where people farm or hunt and live off what is around them, with relatively little interaction with global-scale processes.

Of course, even indigenous tribes living deep in the Amazon are increasingly tied into the world’s larger network of economic transactions, clustered (at least for reporting purposes) into nation states, and woven tightly together by trade, technology, and currency exchange. But the “the global economy” is not a monolith. The process of using resources, creating value, and meeting human needs and aspirations looks very different from one place to another.
And so does happiness.

The rise of the Green Economy has been accompanied by the rise of happiness and well-being as new paradigms for national progress, complete with new indicators. Countries around the world are studying, preparing, or already using these measures as policy tools. The measurement of happiness may differ in methodology depending on whether one is British or Bhutanese, but within that diversity lies a clear commonality: the desire for a good life, and the growing realization that it is good lives, and not GDP growth per se, that our citizens actually want, and that our economies are truly meant to provide.

Life Beyond Growth, after surveying the dizzying diversity of concepts and measurements now being experimented with across the globe, makes a simplifying proposal:  let’s link these two concepts, Green Economy and National Happiness, explicitly.

There is ample justification for this linkage in existing international agreements; indeed, happiness — or at least, the possibility for achieving it — may already be a human right. None of the thirty articles in the Universal Declaration of Human Rights, adopted by the United Nations in 1948, specifically mentions happiness. But Article 25 states, “Everyone has the right to a standard of living adequate for the health and well-being of himself and of his family….” It also specifies many of factors identified by researchers as the precursors to subjective happiness. These basic needs include food, shelter, clothing, medical care, and other social services, including support to those who are unemployed. Many other rights guaranteed by the Declaration are also related to what researchers say make us happy, including work, recreation, and the possibility to participate in the decisions that affect our lives.

If a phrase like “National Happiness” is at least a close cognate to the concept of universal well-being sketched out in the Declaration — and despite debates over nuances of definition, few would deny that it is — then the adoption of National Happiness measures, in conjunction with Green Economy policies, could be seen as an overdue implementation of the ideals embraced by the world more than sixty years ago. More importantly, embracing happiness as a human right could create the possibility for compromise and common vision regarding a fair distribution of global resources. Happiness, research now confirms, does depend on having achieved a certain minimum standard of material prosperity. But growth beyond that minimum appears to return less and less happiness, until it finally reaches a point where growth itself, green or otherwise, turns into nothing more than waste.

Marrying the concept of Green Economy to the concept of National Happiness can help us see the differences between growth that enriches, and growth that actually impoverishes. It has the potential to describe — perhaps for the first time — a clear and actionable vision for sustainability at the global scale. Where do we truly need growth, to ensure that happiness is at least within reach? And where do we need de-growth, for example in our carbon emissions or impact on biodiversity, if we are to insure that all have a chance to exercise their right to happiness, now and in the future?

For the first time, research techniques can even provide us with measurable, quantitative targets that link economic progress to wellbeing. New indicators can give us feedback on our progress toward this integrated vision vision, using measures that compete favorably with traditional economic signals in terms of robustness. We really do have all the tools we need to aim effectively toward transformation.

The world is in serious need of a new vision, one that can make the concept of sustainable development more real for people, and that can provide the nations of the world with a new sense of common ground. I believe that vision is already emerging all around us, in places large and small — as noted earlier, from Britain to Bhutan. 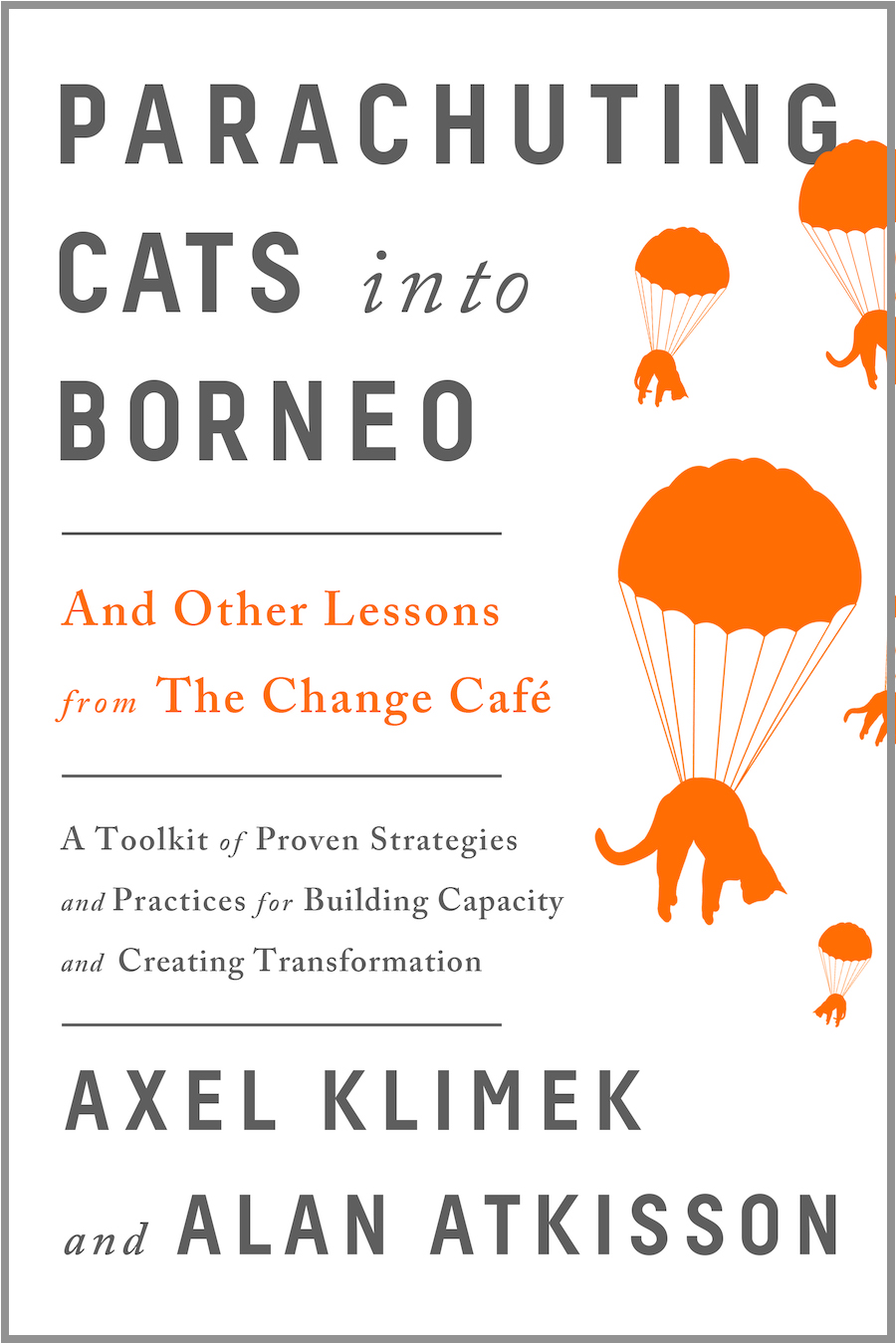