As I’m sure you have noticed, renewable energy is taking the world by storm, driven by rapidly falling prices. Ever wonder how that happened?

In 2009, I authored a concept paper for the United Nations Secretariat, for circulation at the Copenhagen Climate Summit. COP15 became infamous because it was deemed a spectacular failure. Heads of state were personally negotiating the terms of the weak “Copenhagen Accord” into the wee hours of the night — a sure sign that the diplomatic process had broken down.

Fortunately, that process had nothing to do with my job in Copenhagen, which was to garner support for a bold new initiative — a “Big Push” strategy — to scale up renewable energy in the developing world, and thereby bring the price down to affordable levels globally.

I’ll skip over the technical details of the plan I was proposing, working on behalf of senior officials in the U.N. Department of Economic and Social Affairs. The basic concept was to invest heavily in renewables in poor countries, using a globally coordinated system of price guarantees (aka “feed-in tariffs” — you can read the “Technical Note” here). Pump money for solar panels and wind turbines into those countries, and the resulting scale-up in production would bring global prices for those technologies down, and fast.

Fast was important: Otherwise, developing countries would get locked into cheaper, dirtier fossil fuels, and there would be no chance of meeting global CO2 reduction targets.

The idea for this Big Push had originated with Tariq Banuri, a brilliant policy innovator from Pakistan who was then serving as the U.N.’s director for sustainable development. My job was to develop his idea into a clear proposal, with numbers and an implementation strategy, then recruit wise and respected voices at Copenhagen to support the package.

And we did. The positive response we received to Tariq’s concept of a “Global Green New Deal” for renewable energy was one of the few bright spots to emerge from Copenhagen, even though not much came of it after that.

(The full story of my experiences in Copenhagen is told in the second edition of my 2010 book, “Believing Cassandra.” After COP15, I started building a nonprofit organization to promote the Big Push, but dropped it when many of our ideas were absorbed into then-U.N. Secretary-General Ban Ki-moon’s Sustainable Energy for All initiative, launched in 2011.)

But here’s the punchline: In hindsight, pushing this Big Push strategy was probably unnecessary.

It turns out there was no need to sell governments and investors on the idea of scaling up renewable energy, and to incentivize them with a complex global subsidy scheme.

It turns out there was no need to sell governments and investors on the idea of scaling up renewable energy, and to incentivize them with a complex global subsidy scheme. Much to my (and everyone else’s) surprise, the world already has achieved the affordability targets we set, well ahead of the schedule we were envisioning — without any such scheme.

It is important to underscore that those targets, and our proposed schedule — bringing the price of solar and wind energy down to about 3 cents per kilowatt-hour, within 10 to 20 years — seemed wildly, even unrealistically ambitious back in 2009. But by 2017, just eight years after Copenhagen, the achievement of those targets is already in the rear-view mirror. 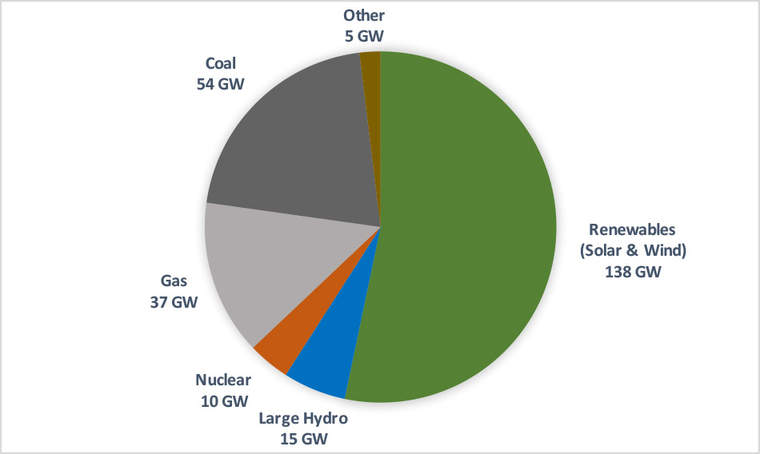 Take a good look at the pie chart above. The data comes from Bloomberg, published by U.N. Environment Programme and the Frankfurt School of Finance and Management. Notice that over half of all the new electricity capacity installed globally during 2016 came from solar and wind. For five years running, solar and wind have outpaced coal and gas by a wide margin. While there is a long way to go before the world is driven principally by renewables, the energy transformation is well under way.

A key factor driving this transformation is the price of renewables, which has dropped like a stone. Why? Exactly for the reasons we described in 2009, based on a well-known economics concept called the “learning curve”: The more you make something, the more you learn how to make it cheaply and efficiently.

Economists can predict declines in price by plotting these learning curves on a graph, relating price to the quantity of a thing produced. It doesn’t matter how much time it takes to produce the thing; quantity is the key variable. The faster you produce that quantity, the faster you slide down the learning curve towards the associated lower price.

When drafting our Big Push plan in 2009, I was astonished to find that the learning curves for renewable energy being used by most analysts originally had been drawn in 1992. No one had thought to update them. The curves seemed very pessimistic to me, given how fast China (among other actors) was coming online with solar panels and wind turbines. I suggested those curves needed to be redrawn, with new assumptions, based on the rapid developments and faster-than-expected learning we already were seeing in the renewables market.

As it turns out, my optimism was still amazingly pessimistic.

In 2009, even after adjusting the learning curve, we thought it would take about 2,000 gigawatts of installed solar and wind power to bring the price down to our global affordability target of 3 cents per kWh. But that price was reached in a number of countries, including India, Mexico, Chile and Morocco, by 2016. And the total installed global capacity at that time: Just 800 gigawatts — less than half of what we calculated would be necessary.

Bear in mind, 800 gigawatts of solar and wind energy is still a huge number, compared to where things started in 2009. Back then, the world’s wind turbines, if they were spinning at full capacity, could generate just over 150 GW. By 2016, that number had swelled to nearly 500 GW. The growth in solar photovoltaics was even more rocket-like: from 23 gigawatts of capacity in 2009 to more than 300 in 2016. 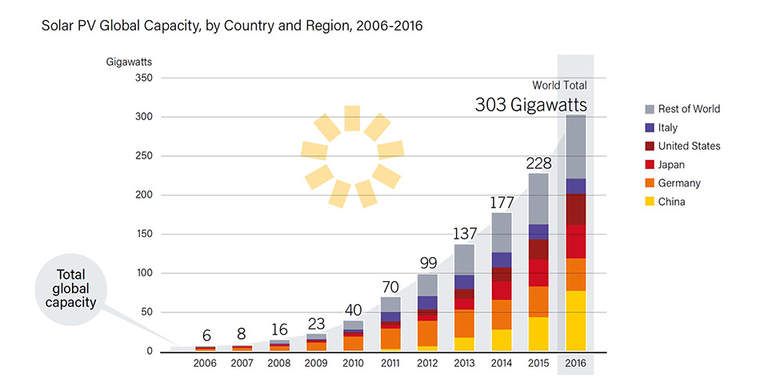 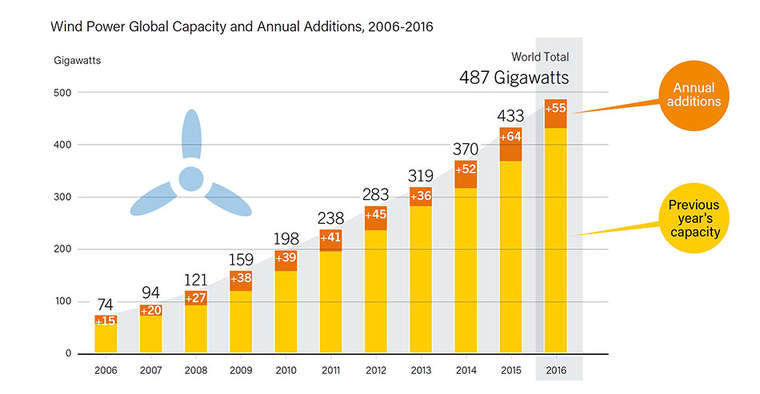 Even the world’s top energy experts call this rapid fall in prices astonishing. How did the price fall so much faster than anyone expected?

Simple: Our expectations were plain wrong. You’ve no doubt heard of Moore’s Law, describing how the power of computing chips doubles every 18 months. How about Swanson’s Law? The term was introduced in an Economist article in 2012 to describe a similar pattern for solar panels. Swanson’s Law was basically a revised learning curve, one much closer to the curve we redrew at the U.N. in 2009 (but never published).

There is just one problem with Swanson’s Law: it, too, has proven far too pessimistic. Current prices for solar-electric panels are less than half of what Swanson’s Law would have predicted.

In reviewing these amazing and historic developments, it occurred to me that the world did get a Big Push strategy after all. Renewable energy scaled up rapidly in developing countries, pushing down renewable energy prices globally.

But we didn’t need a massive effort to mobilize international aid, as well as investments from the world’s rich countries, at the trillion-dollar scale we envisioned in 2009. It happened thanks to the target countries, the ones we call “developing,” especially China and India. And it happened faster than predicted, because our predictions were too pessimistic.

It turns out these countries learned faster than any “learning curve” Western experts could draw.

There are several extremely important lessons in all that, but here’s the biggest one: Never doubt that massive, transformative change is possible. It’s happening all around us, all the time — and usually faster than anyone expects.