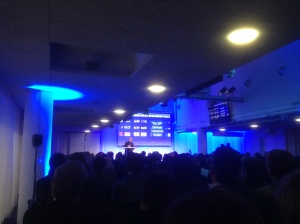 I work as a consultant. I also make my living, partly, inspiring other people — or trying to. People pay me to write, to speak, even to sing in ways from which they can gain new ideas and/or new energy, so that they can continue with the challenging work of creating a sustainable world.

But as you might know yourself (because maybe your work is similar), we “inspire-ers” also need to be inspired. So how do I inspire myself?

Why, by going to an “Inspiration Day,” of course.

Actually, right now, I should be in Bangkok, running an ISIS Academy Master Class in sustainability and change. We had to reschedule that Class, which had 24 people signed up from all over the Asia-Pacific region, because our training would have been taking place right around the corner from the protests that are clogging up and disrupting that city now. (We have rescheduled for Apr 28-May 2.)

But I’m not in Bangkok, so I have a luxurious amount of unscheduled time on my calendar. Andreas Gyllenhammar, who is Chief Sustainability Officer of the Swedish engineering and architecture giant Sweco, has kindly invited me to join the company’s Inspiration Day. (Sweco, with 9,000 professionals working around the world, brands itself as a purveyor of sustainable engineering and design. My being here is facilitated by the fact that a lot people in that company have read my little book Sustainability is for Everyone.)

So, thanks to Andreas, I now have the pleasure of listening to Colin Harrison, the man who invented the concept of “smart city architecture” for IBM — among a dozen other things. Talk about a sweeping vision of cities and their future! He cites friends of mine such as Sander van der Leuuw, the archaeologist and innovation expert, so I feel right at home intellectually. But I’m also meeting top innovation executives from other Swedish companies that are clients of Sweco, such as Ericsson and Ikea. Future-oriented, big-picture thoughts are flying thick and fast around me.

We’ve already had a stimulating smaller-scale lunch where, under Chatham House Rules (you can cite what you discussed but not who said it), we talked in small groups about where technology is taking us, especially in the context of cities. The conversation has been wide-ranging, from the highly technical (a typical “smart building” with all its various sensors can now easily generate 100 gigabytes of data every day, so what do you do with the data?!) to the very philosophical (how do people feel about Google knowing everything about our home appliance use, too, in the age of state surveillance disclosures by the infamous Edward Snowden?).

But lunch is over — this is live blogging — and now Colin is holding his keynote, to a larger crowd of several hundred. “The ability to manipulate information is a transformational technology,” he notes. It’s not just about marginal improvements in energy efficiency, or finding out which road the least traffic. He cites the Venezuelan economist, Carlotta Perez, who was asked by IBM about where we are, as a planet, in terms of the information revolution. Her answer: just beginning.

“We have built a planetary information platform, Carlotta told us,” says Colin, “but we have only begun to figure out what to do with it.” Colin takes us on a quick trip through time, focused around the number 4:  1954 (commercial computing begins), ’64 (breakthroughs like IBM’s System 360), ’74 (the 4-bit chip from Intel), ’84 (Apple’s Macintosh computer), ’94 (the year of the Internet’s big breakthrough), and ’04 (cloud computing — computing power becomes like “air,” all around us).

What will 2014 be the year of, wonders Colin? In brief, he’s betting that is marks the year that we finally break out of the centralized model of the city that goes back 4,000 years and was especially fixed in place during the 19th century — and that we are unleashing, right now, an ever faster acceleration of innovation. How will that happen? How will we switch from the fossilized, centralized, closed systems that still comprise many of our city-based innovation programs today, to truly distributed, open systems?

Technology is already making it possible. The “Maker Movement” … 3D printers … “You can practically do it [drive technology innovation forward] at home. In ten years’ time, you can certainly do it at home.”

Now the moderator, a Swedish media pro named Lotta Lundgren, is interviewing Andreas Gyllenhammar — in her beautifully lilting and musical Swedish — about the kind of cities and houses we are going to live in, in the future. Andreas is quite convincing when he talks about why we are going to live in smaller, smarter houses.

“I’m a fairly recent homeowner,” he tells us, “which is cause for a fair amount of anxiety, as others here probably also have experienced. You lie awake at night wondering about the health of your house. In the future, you won’t worry about whether there is water damage or mold growing in your walls. There will be a sensor that rings and lets you know whether or not something needs to be attended to … and then someone will come and fix it. We will be able to relax.”

Suddenly, in Lotta’s delightful way of painting up this future, she and Andreas are living together, even married, and she’s saying, “But Andreas, you remember that time you linked all our dimmer switches to the mobile telephone, and it took me 15 minutes just to figure out how to turn on the stereo?”

“Ah yes,” says Andreas, sliding easily into this fantasy moment, “you turned on the water hose instead.” They work it out, live on stage, how such little technical troubles can be negotiated more easily in the future, and they are once again a happy couple. But suddenly, it’s all over. Lotta breaks up with Andreas (on good terms of course) and sends him off the stage, to make way for another.

“That’s how I think our relationships are going to be in the future … a little shorter,” says Lotta, to laughter from the crowd. Then she philosophizes about just the opposite, too: “Maybe in the future, we will be married to our things, and have longer term — more sustainable — relationships with them instead.”

Lotta now gives the stage to a former client of mine (as it turns out), Dennis Pamlin, who is practically the embodiment of that wonderful Swedish word, “eldsjäl”. Direct translation: “fire soul.” Meaning: someone who is truly on fire for a cause, a project, a set of ideas. I worked with Dennis when was on the professional staff of WWF, working on sustainable trade models with China. (I traveled to China once to meet Dennis and then present a report on our sustainable trade proposals for China, and we were supposed to meet the head of Ministry of Commerce together on that trip, but it did not happen. If you want to know why, look up the story in my book The Sustainability Transformation.)

Not just reducing problems, even to zero, should be our goal. Creating, giving, making things better should be our goal. Then he gives a ton of examples of how we could do more of this “+” … in contexts where right now we are doing stuff that is actually much worse than zero. One example: Michelin tires for airplanes are being sold as services (kilometers of tire-service) instead of as physical tires. This kind of product-into-service idea, a staple of sustainability thinking, is cited by a large consulting firm, in a flashy report, as being part of the “circular economy.”

“The circular economy became tires on an airplane?” asks Dennis with a very arched eyebrow. “A lot of very strange things must have happened along the way.”

Dennis’s tour through the present and future of sustainable cities is a breathless, challenging, sacred-cow-killing, visionary exercise … so many ways we’re doing it wrong, so many ways we need to do it right, smarter, more positively …

… and I think I’ll leave this article at this point. Dennis, by the way, has just now won the “Hugo Prize” for his many years of work, inspiring people to do more, to dream bigger. So I’ll leave you with Dennis’s favorite mathematical symbol … which I will take a away as a symbol of inspiration itself:  +